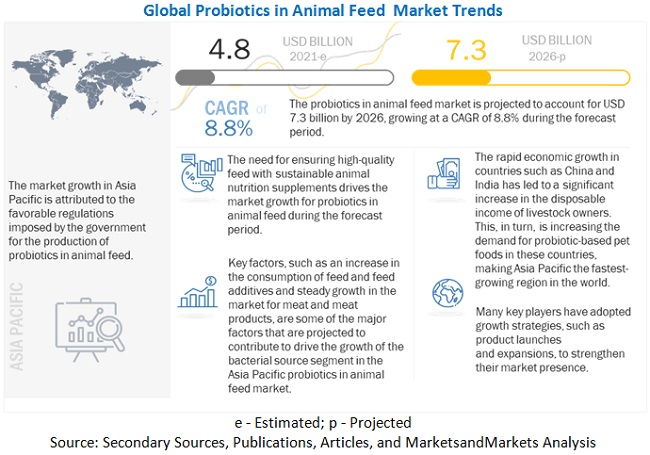 The yeast & fungi segment by source is projected to achieve the fastest growth in the animal feed probiotic market.

Yeasts in poultry have a large and influential role in increasing the efficiency of feed and increasing the turnout of poultry production. The addition of yeast in poultry feed products also makes feed more attractive to poultry. Adding yeasts to drinking water for poultry helps the breeders have different ways to benefit from yeasts in poultry and their distinctive impact on the health and overall performance of poultry, whether they are fattening, laying, or even maternal poultry. The use of yeasts in poultry, either by adding them directly to feed or added to the drinking water, has many benefits and advantages, such as supporting and enhancing the functions of the digestive system.

By livestock, the aquaculture segment is projected to account for the fastest growth in the animal feed probiotics market.

Probiotics, when added to aquafeed, increase their nutritional value, contribute to digestion in the form of enzymes, inhibit the growth of pathogens, and improve the immune response of the species. According to the World Fisheries and Aquaculture report published in 2018, approximately 84% of the total aquaculture production is utilized for human consumption. Thus, there is a need to ensure that what humans receive in the form of food is healthy and does not have any negative impact on their health.

The dry segment by form is projected to account for the largest growth of the animal feed probiotics market over the forecast period.

The dry form of probiotics is usually mixed in the feed for animals, including cattle, poultry, and swine. Cattle often consume dry tropical grasses, which have high fiber content but are poor in taste and have less nutritive value. Due to these factors, various types of dry specialty feed additives, such as bacteria and yeast, are used in feed, particularly for animals, such as dogs, cats, horses, and cattle, to fulfill their nutritional requirements. These additives serve as excellent carriers for feed and are nutrient-rich. They make the feed palatable and increase its consumption among animals, which helps in reducing feed wastage and labor requirements.

Asia Pacific is projected to be the fastest growing market.

The growth in population, rise in disposable incomes, rapid urbanization in the Asia Pacific region, and an increase in demand for high-quality meat products are the key factors that have encouraged the demand for feed additives. Substantial growth is witnessed in countries, such as China, India, and Japan, due to the increase in the purchasing power of the population and demand for protein-rich meat diets. Pork and poultry are widely consumed in the Asia Pacific region. Moreover, consumers prefer opting for products that have high nutritional content and offer health benefits and exotic tastes. Thus, fish and other seafood products are also a preferred option for consumers, which is also a growing industry in this region. The presence of a wide range of fishery resources, both freshwater and marine, is considered a key factor that has encouraged the consumption of seafood products in the Asia Pacific region. There is an increase in consumer demand for fish produced without antibiotics that are environmental-friendly and animal-friendly. This new trend in the aquaculture industry is leading to a change towards sustainable aquaculture production methods, which, in turn, results in an increase in the usage of feed additives, such as probiotics, in feed products. This, in turn, is projected to drive the growth in the probiotics in feed market.

Welcome to Short Term Cash When It Comes for Extra Funds

Helen ClarkBusinessSeptember 2, 2022
An emergency is such a name that hassles one and all whether we’re salaried persons. Unforeseen expenses we face are …
END_OF_DOCUMENT_TOKEN_TO_BE_REPLACED

Sonu KumarBusinessJuly 12, 2022
The market research study on the Latin America Off The Road Tire Market offers a thorough examination of the different …
END_OF_DOCUMENT_TOKEN_TO_BE_REPLACED